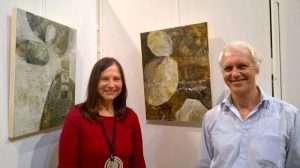 Opening night at “Le Salon des 40” with my husband and sponsor, André Stoller.

It’s been quite awhile since I posted in my blog and much has happened. I was very busy fall after returning to France from my residency in the states. I participated in my first showing in both France and Basel.

First it was a show in St. Louis France. St. Louis is a town that shares borders with France, Switzerland and Germany. For over two decades the juried show has featured works of artists who share these borders. I was accepted to exhibit in Salon des 40 à Saint-Louis. It was a great experience and a huge learning curve to show and talk to people about my art in French! I was surprised that the communication went so well. All of my work exhibited earth tones and in particular brown. Brown isn’t an easy color for most people and I wasn’t sure how people would respond, but even with language barriers I received a lot of positive feedback, especially about the colors.

One of the most memorable highlights of the weekend was when my entire French language class showed up, including the instructor. You can imagine how fun it was with fellow students from Germany, Thailand, Cosovo, Algeria, Morocco, and Turkey all talking art with limited French skills with their own special accents. It was really a sweet memory.

The following week I participated in my first exhibition in Basel with the Arts Organization, Front of Bicycle. The turnout was fabulous and there was great artist camaraderie! The show was held in a beautiful new dance center, the Braswell Art Center. I felt proud and honored to be a part of the exhibition!

Love this crocheted fence I spotted last time I wa

#WIP - this piece has been a bazillion other versi

Here’s what it looks like today. Still needs con

WIP - this one has made a dramatic shift to the li

CREATIVE CONTENT, STRAIGHT TO YOUR INBOX!
Sign up below to keep in touch with what I’m up to. You'll get a gentle, arty newsletter, (usually quarterly),  where I share my work in progress, releases of new work, blog updates and videos and invitations for upcoming shows and events.

Why not keep in touch?
*Your personal information is contained behind secured networks and is only accessible by Jaffke Studio. Your email address is kept strictly confidential.

Powered by Convert Plus